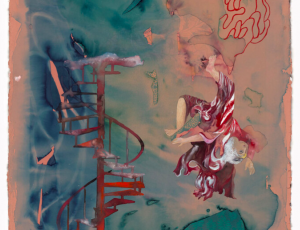 Join artist Shahzia Sikander for a virtual presentation and reading of her new children’s book, Roots and Wings: How Shahzia Sikander Became an Artist, co-authored with Amy Novesky and illustrated by Hanna Barczyk (available April 2021). Learn about Sikander’s inspirations and influences, and explore how her drawings, paintings, prints, mosaics, and animated films bring traditional artforms into dialogue with contemporary visual practices. Ask questions during a Q&A session. 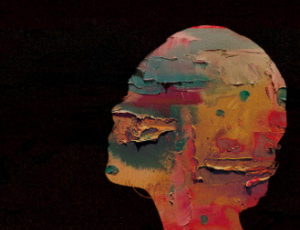 Join the Department of Performance Studies in conversation about Sadia Abbas's novel, The Empty Room. Abbas will be joined by poet, fiction writer, critic, and translator John Keene and artist Shahzia Sikander.

This conversation will be moderated by Professor Fred Moten. 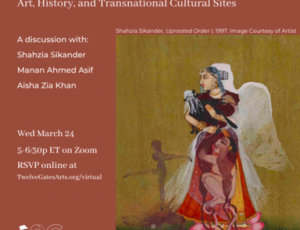 Examining through the lens of different disciplines, Twelve Gates Arts convenes three diasporic South Asian arts practitioners originally from Pakistan to ask the question: Who gets to tell the story of us? 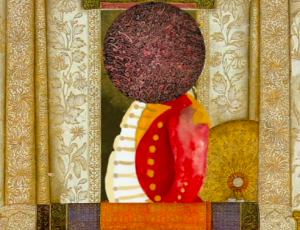 The Centre for Visual Culture

Shahzia Sikander changed the game of the art world with her breakthrough at the Whitney Biennial in 1997. This year, Salman Toor, debuted his first solo museum exhibition at the Whitney, How Will I Know. In June, Sikander will open a career retrospective, Extraordinary Realities, at the Morgan Library & Museum co-organised with the RISD Museum. Centered on issues of gender, identity, global affiliations, appropriation, and narrative, this conversation engages the relationship between two artists on how they have navigated the shifting worlds of New York and Pakistan. In dialogue, we will pause and reflect over how we got here and anticipate where we are going. 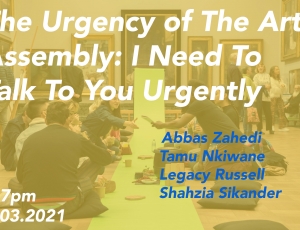 The Urgency of The Arts Assembly: I Need To Talk To You Urgently

Join the first Urgency of The Arts Assembly: I Need To Talk To You Urgently with guest speakers Abbas Zahedi, Legacy Russell, Shahzia Sikander & Tamu Nkiwane.

Each speaker, nominated by a current student from the School of Arts & Humanities at the RCA, will present an issue that is most important and most pressing to them right now.

Presentations will be followed by Q&A. 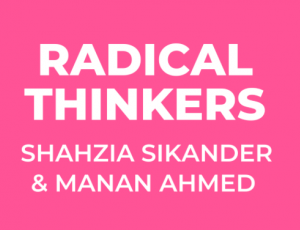 Presented by the Asian American Writers’ Workshop, this new series,Radical Thinkers, places radical academics directly in conversation with trailblazing writers, poets, and artists, creating and nurturing two-way dialogues that will interrogate some of the most pressing issues facing Asian and Asian diasporic communities today. Featuring an interdisciplinary lineup of scholars and creatives, these unexpected pairings will center revolutionary discourse and scholarship in an effort to demystify intellectual debates, collapse the divide between the ‘ivory tower’ and the public sphere, and ultimately envision a radical new future.

The first installment of this series presents historian, professor, and AAWW Board Member Manan Ahmed in conversation with acclaimed visual artist Shahzia Sikander. 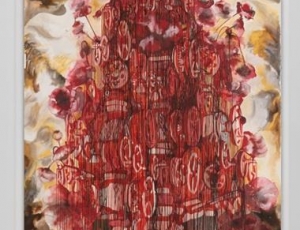 Virtual Gallery Tour and Artist Conversation with Dr. Ainsley M. Cameron and Jason Rosenfeld. In the first session of this program, Shahzia Sikander will lead a virtual tour of the exhibit and will be joined by Jason Rosenfeld for a conversation about the works in the show. Dr. Ainsley M. Cameron will lead a discussion with Shahzia in the second session where they will discuss themes of feminism in Sikander’s work. 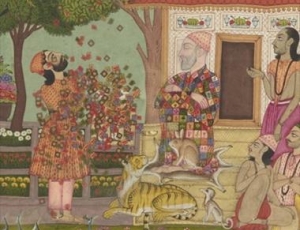 Shahzia Sikander will be in conversation with the inimitable composer Du Yun, awarded the Pulitzer in Music in 2017, who wrote the musical score for all three films. Du Yun and Sikander’s decade-long collaborations span Shanghai, New York, Sharjah, Istanbul, Hong Kong, and Pakistan and speak to their ‘creative intimacy,’ female agency and shared passion for finding common ground through multiple languages. 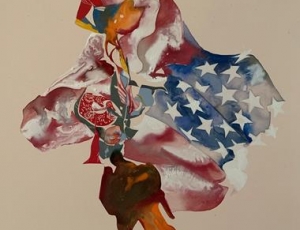 Please join Shahzia Sikander and Sean Kelly in conversation as they discuss Sikander’s inaugural exhibition at the gallery, the artist's career, working in a new medium and her forthcoming monograph and exhibitions at The Morgan Library, New York in June 2021 followed by the RISD Museum, Rhode Island in November 2021, and MFA Houston, Texas, Spring 2022. 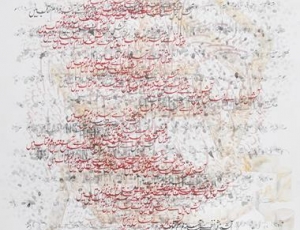 In 1994 Asia Society launched its contemporary art program with “Asia/America: Identities in Asian American Art,” a landmark exhibition that considered bicultural identity in the work of diasporic and Asian American artists living and working in the United States. A quarter-century later, this panel will reflect on the current playing field of artistic representation for Asian American and Asian diasporic artists in the United States and how these artists position themselves within a globalized art world. This conversation features artists Jordan Nassar and Shahzia Sikander and is moderated by Michelle Yun, senior curator, Asian contemporary art and associate director, Asia Society Triennial. 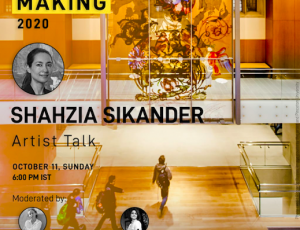 We are pleased to invite you the next artist talk of On Making, 2020 – a series that delves into the age-old query of “how do we make?” Tracing the different arcs of art and exhibition-making and how these might respond to the changing contours of tomorrow, we have with us this week a leading pioneer of neo-miniature herself – Shahzia Sikander. 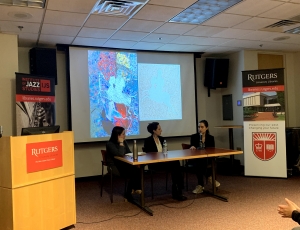 The Praiseworthy One: Devotional Images of the Prophet Muhammad in Islamic Traditions

This presentation by Christiane Gruber explores a number of paintings of the Prophet Muhammad produced in Persian and Turkish lands from the fourteenth century to the modern-day. Ranging from veristic to abstract, these images represent Muhammad’s individual traits, primordial luminosity, and veiled essence. Their pictorial motifs reveal that artists engaged in abstract thought and turned to symbolic motifs in order to imagine Muhammad’s primordial origins and prophetic standing. In creating and gazing upon such images, artists and viewers also were inspired by various mystical beliefs and practices, including devotional invocation, in the process seeking to express their piety through both verbal and pictorial language. Within a variety of Islamic expressive cultures, paintings thus have functioned as a powerful means for devotional engagement with Muhammad, the “praiseworthy” Prophet and Messenger of Islam. 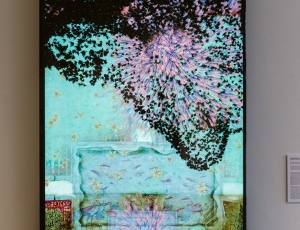 Dr. John Seyller, Professor of Art History at the University of Vermont, leads a gallery talk on the dynamic intersection of the tradition of Indian miniature painting and the contemporary videos of Shahzia Sikander, featured artist in Transcendent.

Shahzia Sikander merges the South Asian tradition of miniature painting with contemporary forms and styles, creating visually compelling, resonant works. Her multi-scaled imagery crosses boundaries of geography, religion, and style. Sikander earned her BFA from the National College of Arts in Lahore in 1992 and her MFA from the Rhode Island School of Design in 1995. She has exhibited nationally and internationally at venues such as the Pakistan Embassy in Washington, D.C.; Whitney Museum of American Art, New York, NY; the San Diego Museum of Art, California; Museum of Modern Art, New York, NY; and Museum Ludwig in Cologne, Germany. Sikander has received many accolades including the Asia Society Award for Significant Contribution to Contemporary Art (2015); MacArthur Fellowship (2006); Inaugural Rockefeller Foundation Bellagio Center Creative Arts Fellowship, Italy (2009); Joan Mitchell Award (1998–99); Louis Comfort Tiffany Foundation Award (1997); and the Shakir Ali Award from the National College of Arts, Lahore, Pakistan (1992). Shahzia Sikander currently resides in New York, NY where she is represented by Sean Kelly Gallery. 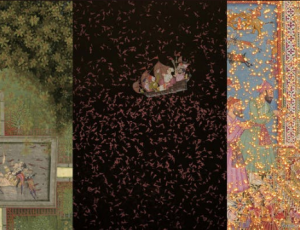 Myths, Memories and Miniatures: The Art of Shahzia Sikander

by The Research Forum

Sikander’s pioneering practice takes classical Indo-Persian miniature painting as its point of departure and challenges the strict formal tropes of the genre by experimenting with scale and various forms of new media. Trained as a miniaturist at the National College of Arts (NCA), Lahore, Sikander has developed a unique, critically charged approach to this time-honoured medium. Informed by South Asian, American, Feminist and Muslim perspectives, Sikander employs the miniature’s continuous capacity for reinvention to interrogate ideas of language, trade, empire, and migration. At the NCA, Sikander’s thesis project, the Scroll, launched what has come to be called the neo-miniature, and she was the first woman to teach miniature painting. H er works encompass painting, drawing, animation, installation, video and film. Shahzia Sikander has previously shown at the Aga Khan Museum as part of “Nuit Blanche” (2017) and “Listening to Art, Seeing Music” (2018). 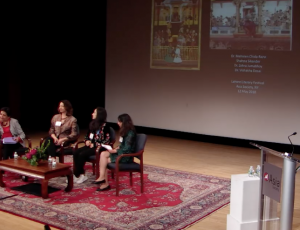 The Lahore Literary Festival (LLF), one of South Asia’s premier cultural events, returns to Asia Society New York for the third year. LLF in New York will explore contemporary Pakistan through artists, writers, and commentators. The festival will present American audiences with a more nuanced view of Pakistan and include discussions on fiction and nonfiction writing, art, architecture, history and politics. 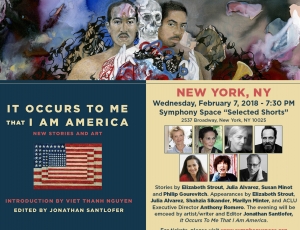 It Occurs to me that I am America

In Conversation with Jonathan Santlofer

A provocative, unprecedented anthology featuring original short stories on what it means to be an American from thirty bestselling and award-winning authors with an introduction by Pulitzer Prize–winning author Viet Thanh Nguyen: “This chorus of brilliant voices articulating the shape and texture of contemporary America makes for necessary reading” (Lauren Groff, author of Fates and Furies). 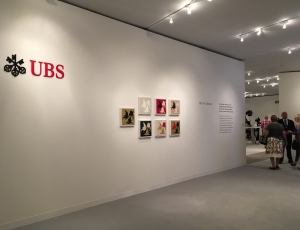 On Thursday December 7, UBS will release new findings on the habits of art collectors and their implications in an Investor Watch Pulse Survey 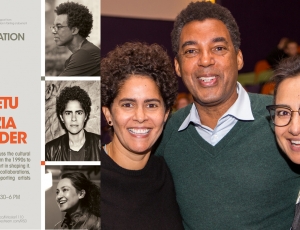 Sikander, Rick Lowe and Julie Mehretu (RISD MFA ’97) will discuss the cultural landscape from the 1990’s to present day and their part in shaping it. The friends will develop a dialogue about artists supporting artists, collaborations, mentoring, and what lies ahead. 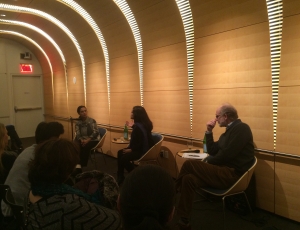 Lahore on My Mind

On Friday November 10 at 7 pm, join artist Shahzia Sikander in conversation with Sadia Abbas moderated by Richard Davis as the opening event of Lahore on my Mind, a public festival that moves between the past and the present to explore the early modern, colonial, and contemporary cultural worlds of South Asia. 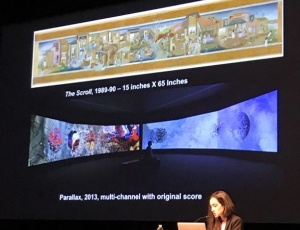 Shahzia Sikander will be one of many speakers at the 7th Biennial Hamad bin Khalifa Symposium on Islamic Art on Nov. 2-4 in Richmond, Virginia. 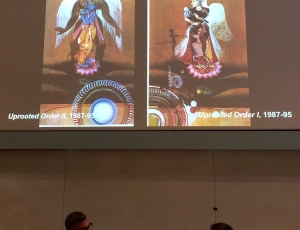 The Art of Independence: Visions of the Future in India and Pakistan 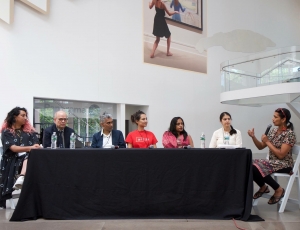 A three- day convening of established and mid career South Asian American artists, academics and curators. Fatal Love: Where Are We Now? examines contemporary art production by artists, academics and curators in the South Asian American diaspora. Although we have had a strong presence in the New York art world for the last two decades, we have yet to engage in a nationwide dialogue. A lack of institutional support and scarcity of full time contemporary art South Asian curators employed in any local museums have prevented generations of artists from forming networks that go beyond the local to a national scale. 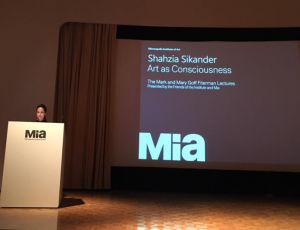 On September 8, Shahzia Sikander will speak at the Minneapolis Institute of Art, launching the new season of the Mark and Mary Goff Fiterman Lecture Series. 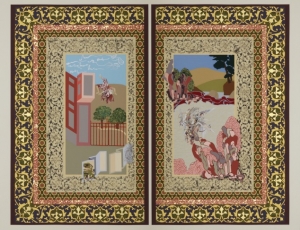 Shahzia Sikander in Panel at the NYPL

Shahzia Sikander will participate in a panel discussion on women in printmaking at the New York Public Library's Schwarzman Building on February 4, 2016, 6pm. The event will begin with cocktails and include a tour of the library's current exhibition, chronicling women in printmaking from 1570 to 1900.

The panel will be moderated by Anne Higonnet, Ann Whitney Olin Professor in the Department of Art History and Archaeology at Barnard. The discussion will also include Pace Prints collaborator April Gornik and Dana Schutz.

Sikander is currently working on her first print edition with Pace Prints, to be published this spring.

View More
Back To Top